How often does your father give you a piece of advice? That didn’t happen a lot for me, but when he did – I usually didn’t act as he advised, but I always kept his words in my mind, at least for a short period.
I was lurking around, and trying to see if I can apply his advice in my daily life. Almost always that situation didn’t happen again, so I merely dismissed his words.

In this article, we will not push you on for anything. It’s understandable that everyone has different situations. Different families, different relations and it’s not easy to give any guidance on such a topic.

Before we start, you can put the famous Eric Clapton’s song in the background and enjoy the read.

But he was right

Think about it, it seems like you are trying to understand this world with your vision, but there still is a shadow covering some places. You try to conclude, but nothing works out, right?
And then you have a flashback of your memory, you can even hear your father’s voice, and then you get it: your father already told you about this. He already warned you. But you didn’t listen.

Don’t trust your woman if she is lying. Don’t argue with an idiot, forget about your education, don’t drink alcohol, don’t try to become an adult until you grew up as one. Physically you are a mature person, but are you mentally?
You might say yes, you father used to smoke one pack of cigarette every 10 hours, drinking 1.5L of whiskey every day, but hell, he knew what he was saying. And its unknown where does this knowledge come from. Experience? Maybe.

My father’s son
I live my life, as my father’s done
If he’d told me, one day
That somebody would have my heart in
Chains would I believe it, no way
Made up my mind, I’d never fall that way
But it’s heart over mind, yes I’m my father’s son

An interesting thing, regardless of how strong our relationship should be with our dads, most of the times it ends to be as weak as you can imagine.
From my personal experience – the weaker your relationship is, the less you want actually to become like you dad. You cut out all your character treats that make you look like him. Indeed, who wants to follow the same steps as the loser does. But the stupid guy you are, you will enver realize that you only harm yourself.

There is no running from genes. Try as much as you can – you will never make it. Whatever you do, you will always remain that person, cursed by the genes.
Trying to overcome your genes is a mistake, and the nature of the error is a desire to prove something.

You can be too similar to your father: you have the same glare, you light your cigarette the same way, you use the same words, and you are as hot tempered as your dad is.
You live your life, and you make mistakes. The only thing you can do – is to learn from them, not to repeat them twice.

Maybe not all of the words your father told you are correct. Perhaps even most of them were complete nonsense, but you have to listen. And it doesn’t matter who is your father – a tycoon magnate or poor timber – you have a piece of himself inside you. He was the one who tried to give you and teach you what he had and what he knew.

Not to feel sorry

Time cures. Time cures from the harm it caused you.
15 years ago you argued with your father. You moved on with your life, having your own family and keeping that argument in your memories for years. Sooner or later you will calm down. If you won’t by yourself, then life will make you. And at the same moment, you decide to call your father to say “Hey dad” – you will realize that it might be too late already. And that’s it. You will be stuck in limbo. You never had a chance to say sorry, or to forgive your father. You will carry this weight forever, and you simply missed your opportunity to make things right.
You were too busy with friends, woman, job, and travels.

“There are many women around, a small number of friends and even less of parents.”

Don’t lose your time. Don’t keep negativity towards your father and dont feel bad to say sorry, otherwise, when you will be ready one day, it will be too late.

My father – my doctor

For all parents, raising a son is much different than raising a daughter.
When parents raise their daughter, they treat her like a princess, expecting that one day they will let her marry some punk from the district nearby.

When parents raise their son, they give him less attention, but more strictness and much more expectations.

Being a kid, you grow up along with another person, who is always unhappy and keeps blaming you for his broken youth and lost chances. When you hit 18, you realize that you had a mature man all along. Despite your hard times with him, don’t be upset, by the end of the day you are a group member who was accepted into the group and had a blessing of using all of the group’s hospitality, the roof above your head and experience.
Soon, when you become old yourself, you will still be like your father – many thoughts, vast experience, but no one to share it with. So you will do your best to raise your son and share everything you know with him, realizing, that he is the mirror image of yourself. 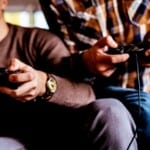 Is Gaming Harmful for you? 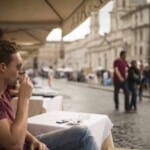 10 reasons why you keep postponing things